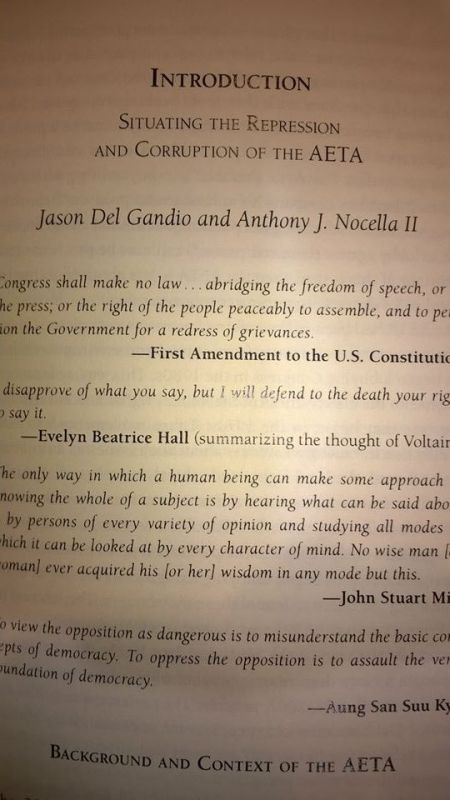 Introduction: Situating the Repression and Corruption of the AETA

In 2006 the Animal Enterprise Terrorism Act (AETA) was passed with the intention to equip law enforcement agencies with the tools to apprehend, prosecute, and convict individuals who commit “animal enterprise terror.” But, as many have come to realize, this act does not concretely define what is meant by that phrase, leading to the interpretation that anyone interfering with a company’s ability to make a profit from the exploitation of animals can be considered a terrorist.

In this unprecedented and timely collection, some of the most influential voices in the world of law and animal rights examine the legalities of the AETA, highlight its repressive nature and the collusion between private interests and political legislation, and provide theoretical frameworks for understanding a variety of related issues. In a series of interviews, the book also gives animal advocates who have been convicted or directly affected by the AETA, including members of the AETA 4 and SHAC 7, an opportunity to speak for themselves. Ultimately, these writers show that the AETA is less about fighting terrorism and more about safeguarding corporate profit, and that it should be analyzed and resisted by everyone who believes in a better world.

Dr. Anthony J. Nocella II an award-winning, author, educator, activist, and community organizer is an Assistant Professor of Sociology and Criminology, Peace and Conflict Studies, Gender and Women's Studies, and Environmental Studies at Fort Lewis College in Durango, Colorado. Nocella is the editor of of the Peace Studies Journal, National Coordinator of Save the Kids, an Executive Director of the Institute for Critical Animal Studies, and Director of the Academy for Peace Education. He has been involved in social justice activist over twenty years and has published over fifty book chapters or scholarly articles and twenty-five books.